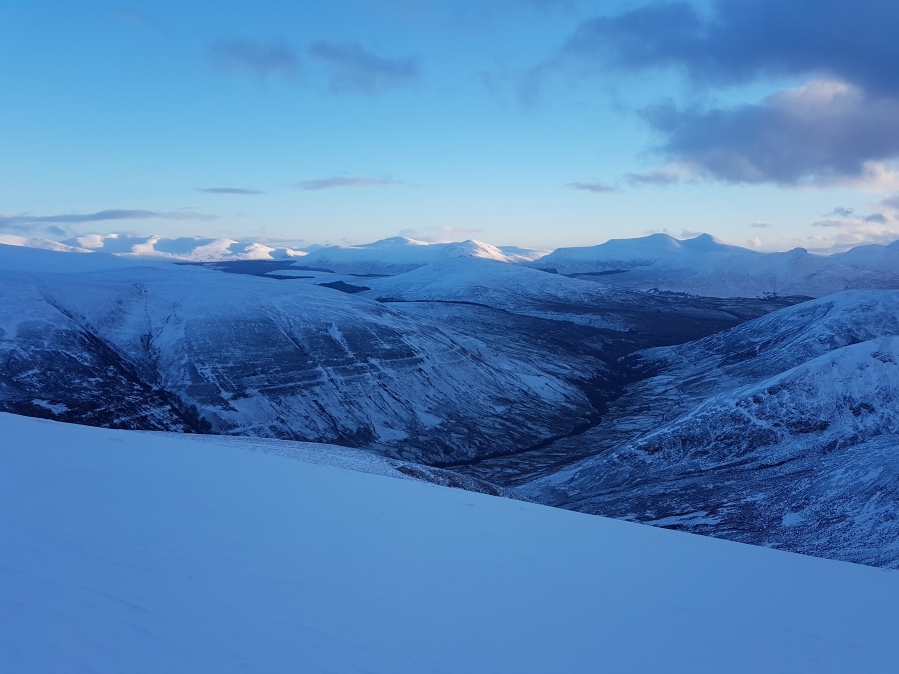 Feels like I’ve neglected my blog a bit, but truth be told life has thrown up some other obstacles meaning writing has took a back seat. One of those obstacles was moving house from rented accommodation to our own home. It’s been a bit stressful, but we’re settling in nicely and after a few hiccups the internet is finally live. I’m not sure how internet providers still haven’t quite mastered a smooth transition between houses?

Anyway, whilst life has been busy since December I have had a few escapes to the hills. Early January before returning to work a few of us headed to Glen Lyon for our new year walk, our choice was the Corbett; Cam Chreag. Wading through deep snow made it tough work. But nevertheless it was a grand sunny day.

Towards the end of January Kevin and I had a fantastic trip to Shielin of Mark bothy. We walked in from the longer but more scenic approach from Glen Esk. Located  in vast moorland, it’s easy to forget that the bothy is more accessible from the Glen Muick side. The longer approach is recommended. There was a mega turbo thaw and all that snow that made Cam Chreag tough work had melted!

In February I attended the ScottishHills meet at the Corran bunkhouse which incidentally I happened to organise. The weather was mostly howling but we managed to bag the Corbett, Beinn Iaruinn down Glen Roy. We ascended the wrong side of the mountain, realising we were walking into the snow corniced Coire nan Eun, we deviated and ascended up some steep broken crags requiring some axe work and kicking steps. Off the steeper ground, we traversed around the top of the coire and to the summit.

On Saturday a large group of us ascended the Graham, Beinn na Gucaig. Roughly translated to Beinn na Cupcake. There was no tasty cakes on offer at the summit, we did however managed to stay below the cloud whilst the higher peaks were stuck in the clag.

Almost a month has passed and the Cupcake was my last hill and it’s safe to stay that the ole cabin fever is setting in big time, missing 1 or 2 tasty weather windows in the process. Seeing photos on social media makes you yearn for the hills even more.

Snowmageddon has thankfully passed and the shops are fully replenished with milk and bread, what is with the panic buying, seriously who needs 12 loaves of bread?

I’m off to Crianlarich next week with a select bunch of like-minded friends. Really looking forward to unwinding with a decent hill walk and some good craic to boot.

Kevin and I also have our next adventure lined up, hoping to walk the first section of the Cape Wrath Trail from Fort William to Shiel Bridge over the Easter break. We do have a second date lined up if the weather looks rubbish. Having been watching loads of wild camping videos over winter, I really hope this goes ahead, as we both want to cut our teeth into multi day backpacking.

So roll on Spring, probably my favourite season. Pre-midge, the nights are drawing out and there is usually a bit of snow leftover on the tops.

4 thoughts on “Where have I been?”